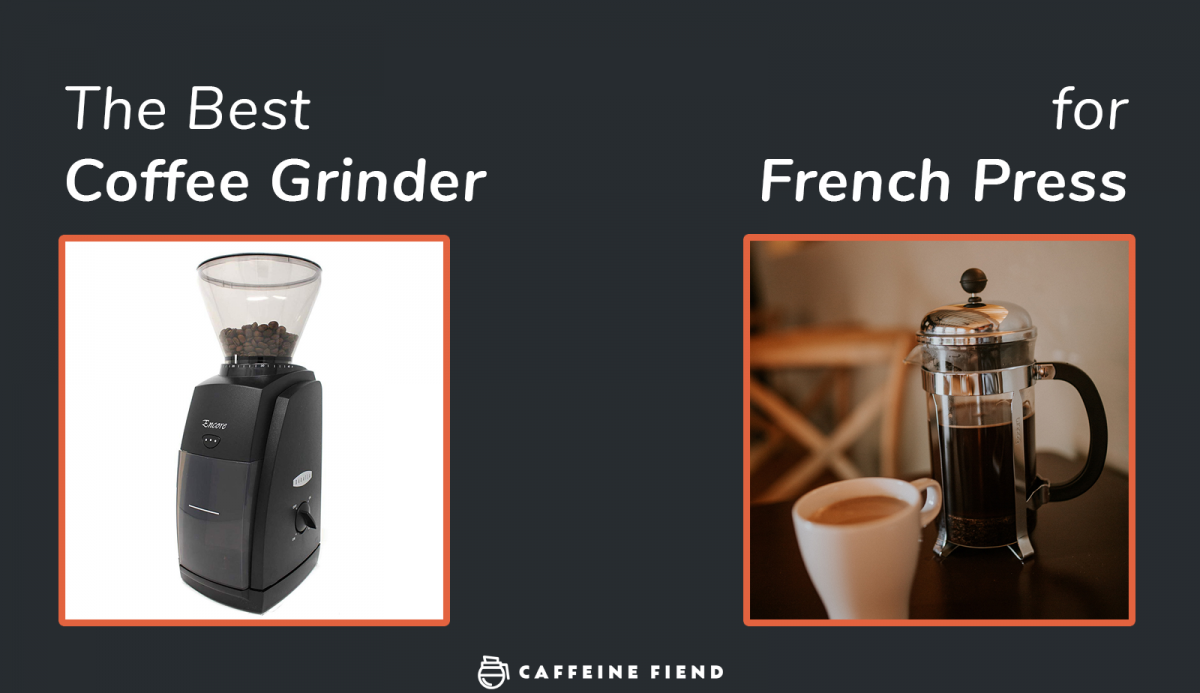 The French press is undoubtedly one of the most popular methods for making high quality coffee among home baristas. It’s unrivaled in both its simplicity and its ability to tease delicate and complex flavors from the coffee beans being used.

But beans aren’t everything when it comes to making delicious coffee. As anyone who has ever tried to make French press at home will know, the quality of the grind is second to none. And achieving the perfect grind starts with having the best coffee grinder for French press.

First, here’s a short roundup for you to skim through:
These are the coffee grinders we’ve selected – and further on in this article we’ll explain in detail our selection criteria. We’ve also included our own reviews for each grinder, and answers to all of your questions about coffee grounds for French Press.

What about pre-ground beans?

There’s nothing wrong with using pre-ground beans per se. In fact, many amateur coffee aficionados start out this way before they gain a deeper understanding of manual grinding and brewing techniques. However, it’s not perfect.

The main issue is the fineness of the grinds. The French press requires medium to coarse grinds for the best possible coffee, whereas store-bought pre-ground coffee tends to be extremely fine and suitable for other styles such as espresso or drip coffee. This type of grind is going to filter straight through the mesh filter of the French press, leaving a gritty residue in your mug.

We’re not bashing pre-ground beans. There are some excellent roasts made by extremely competent baristas out there. But if you want to extract the best, most delicate flavors when using the French press method, then grinding your own beans is definitely the way to go.

So by this point we should have convinced you that grinding your own beans is not only important, it’s crucial. The question is why? What makes home-ground beans so superior to their store-bought cousins?

As we mentioned above, one of the main parameters has to do with fineness, or particle size. The French press requires a medium to coarse grind in order to achieve the best results. This isn’t only because some of the particles will end up in your final product (although that’s one reason), it also has to do with taste and extraction.

The ideal range for French  press uses about 100 to 300 particles of grinds. For comparison, espresso generally needs around 3500. On top of this you also want uniformity to your grinds to prevent over or under extraction.

Because maximum surface area is necessary for full-extraction, a medium to coarse grind will allow for more exposure when added to hot water. This allows for a more thorough and complete extraction. This also allows for a more efficient carbon dioxide release when the grinds are steeping, adding even greater nuance to the final flavor of your coffee.

To really determine which are the best coffee grinders for French press, we’ve carefully reviewed a number of the top grinders on the market. It goes without saying that if you’re reading this guide then you’re serious about making a decent cup of coffee. You’re spending money on quality beans and you don’t want that compromised by a poor or mediocre grind.

With that in mind, we’ve compiled a list of the following qualities that we believe a good coffee grinder for French press coffee should have.

You’ll see this word used a lot in this guide and others, and for good reason. The ability of the grinder to produce consistently fine or coarse grinds is one, if not the, most telling quality of a good grinder. A French press requires a coarse grind, and so you’re going to want a grinder that can deliver this every time without fail.

Grinders are generally divided into two categories – blade and burr. While blade grinders do have their uses, they generally lack the consistency and accuracy that burr grinders deliver. And since this guide is about achieving the best results, we’ve decided to focus entirely on burr grinders.

Another good way in which we’ve categorised grinders is whether they’re manual or electric. Neither is particularly better than the other and it largely comes down to which one you prefer.

A manual grinder has the benefit of being way quieter. Since it’s cranked by hand and doesn’t contain a motor, you can make coffee at all times of the day without worrying about noise. They’re also small and portable, meaning you can bring them with you on a camping or business trip and enjoy quality coffee wherever you go.

However, they’re also slow and laborious to use. Loading beans and grinding by hand is a time-consuming process that also requires you to break a slight sweat. Electric grinders, on the other hand, are great if you’re impatient for your morning cup of coffee and don’t want to work for it.

If you’re investing in the best coffee grinder for French press, then you’re going to want a device that can do more than simply deliver coarse grinds. Grinders are versatile machines, and while producing consistent grinds for French press might be your goal, it’s never a bad idea to pick up one with a broader range of settings.

If you’re someone who only drinks French press occasionally, then maybe you want a grinder that can produce finer grinds for a weekend espresso. We took this into account when reviewing our favorites so you can rest assured that the suggested grinders can be used for a variety of different coffee styles.

As mentioned above, hand grinders tend to be smaller and more portable. Electric grinders on the other hand, can take up a hefty amount of counter space in the kitchen.

If you’ve got the space and are more concerned with grind consistency, then this shouldn’t matter too much. However, this should always be a consideration when deciding on which grinder to purchase.

And of course the final aspect to consider is price. Grinders, both manual and electric, are available across a variety of different price ranges. Obviously not everyone can afford the highest-end grinder on the market, and so we’ve taken this into account.

You can find a decent grinder that won’t break the bank, but it’s generally a safe bet that if you’re investing a fair amount into it then you’re going to get great, consistent returns. It all depends on your budget and how much you’re willing to pay for the best coffee grinder for French press.

With 40 different grind settings, the Baratza Conical Burr Coffee Grinder is a godsend for those looking for some variety and specificity when it comes to the coarseness of their grinds. It’s also why it’s made the top of the list as the overall best coffee grinder for French press. It’s able to deliver consistent and uniform coarseness and is perfect for creating the ultimate French press grinds.

The price tag, however, might scare away a few prospective buyers. At $140, the Baratza is a lot more expensive than some of the other grinders on this list – but it’s worth it. The fact that it’s electric and can grind continually and consistently sets it a league above many other grinders. And so $140 is a relatively small price to pay for the functionality present in this machine.

Priced at only $23.99, the JavaPress is a conical burr hand grinder that is small not only in price but in stature too. It’s the perfect entry level grinder for someone who’s testing the waters when it comes to home grinding, but doesn’t want to splash out on the most intricate tool.

Equipped with over 15 coarseness settings, the JavaPress gives you a level of grind control not seen on many other grinders within this price range. It’s got a solid, clean and attractive design and grinds relatively quietly, especially compared to its electric counterparts. It’s also sporting ceramic burrs, which means it’s going to last about five times longer than its stainless steel burr counterparts.

The OXO Brew Conical Burr Coffee Grinder is a smart and beautiful piece of equipment that delivers grind functionality without a huge price tag. At $99 it’s very moderately priced for what it delivers.

Whereas many other electric grinders rely on a timer in order to process the coffee beans, the OXO uses an integrated scale. This smart technology means that the grinder can accurately detect the precise amount of coffee being ground. This gives home baristas that additional specificity which so many love.

The interface of the OXO is also great. The entire machine is controlled with only one button and dial, making the grinding process fun and intuitive. If there’s criticism to lever it’s that the grinds sometimes tended towards being too coarse.

That being said, the OXO is still a beautiful piece of equipment that is worth buying, especially if smart technology and precision are important to you.

If you’re keen to dabble in home grinding but aren’t comfortable with buying more expensive, sophisticated equipment, then the Cuisiniart DBM-8 Supreme Grind Automatic Burr Mill is your answer. At just $36, it delivers pretty good results without ever setting your wallet on fire.

The design is cute and it will never look off in any kitchen, but for this price point you’re definitely not going to get the most hard-hitting functionality. The grinds won’t always be consistent or uniform, but for a beginner home barista this should do the job adequately. It may not be the best coffee grinder for French press, but it certainly does a decent job.

If you’re looking for something delivers consistent, uniform grinds, is small enough to keep at home as well as take travelling with you, then it’s hard to go wrong with the Khaw-Fee Manual Coffee Grinder. Going for just $26.42, it’s an absolute steal as well.

The Khaw-Fee is not only ideal for producing grinds suitable for French press, but also for various other styles of coffee. Its easily adjustable settings means you have complete control of the coarseness of your grind. What’s more, since the Khaw-Fee is manual, it’s near silent, meaning you can grind coffee in the morning without ever having to wake your loved ones.

Featuring an attractive plastic and glass construction, the grinder also comes apart for easy and effortless cleaning. If you can fault the Khaw-Fee on something this would be it. While the design is beautiful, the glass grinds catcher is fragile and can break if dropped.

If quality is what you want and you’ve got the budget to match it, then the Comandante C40 MK3 is going to be your coffee grinder match made in heaven. Selling at a considerable $250.00, the C40 MK3 isn’t just a grinder, it’s a work of art.

With a body constructed from high quality wood and burrs made of high-alloyed, nitrogen stainless steel, the C40 MK3 is not only pretty, but exceedingly functional too. Grinding coffee is a smooth and effortless experience, and beans are transformed into grinds with only moderate amounts of force.

And while the C40 MK3 is the best coffee grinder for French press, it can handle every other variety too, grinding fine enough even for espresso. This grinder just works on every level, and it’s workmanship is apparent in every aspect of its simple yet powerful design and functionality.

Seriously, if you can afford it and you’re serious about French press coffee, buy the Comandante C40 MK3.