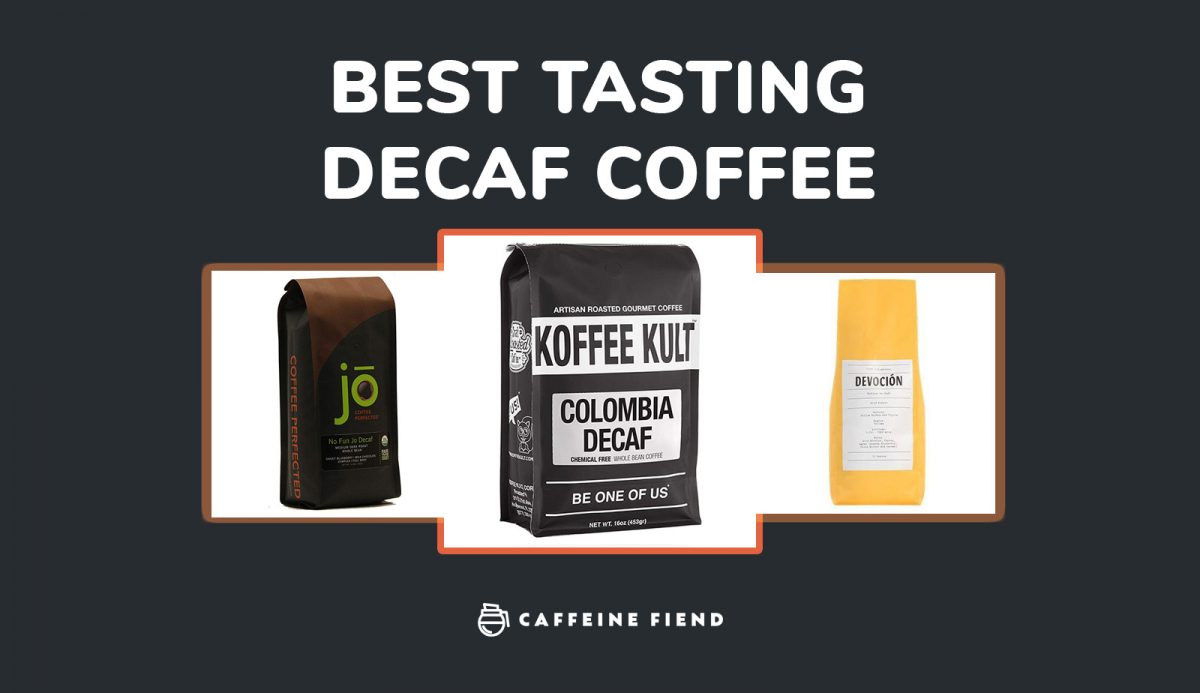 Who can you trust to give you great advice when it comes to choosing the best tasting decaf coffee? Trust someone who has does a complete 180 – from hating decaf coffee to loving it.

Back in the day – when I was a much younger coffee drinker – I wouldn’t be caught dead drinking decaf coffee. There was this (well earned) stigma attached to decaf coffee, it was either bland or just outright tasted awful.

All of that has changed in recent years. Today, decaf coffee is completely palatable and if you do a bit of digging, you can easily find decaf brands that taste better than some brands of regular coffee.

What Exactly is “Decaf”?

Before we get into the best tasting decaf coffee, figure out what make a coffee “decaf”.

As the name suggests, decaf coffee is simply coffee that has had its caffeine content removed (i.e. decaffeinated). However, although the name is easy to understand, we would be stretching the truth if we said that decaf coffee contained absolutely no caffeine.

Back when we discussed whether or not eating coffee beans was safe, we also had to find out (for comparison’s sake) just how much caffeine was in a cup of coffee. The estimated average caffeine content is somewhere between 80 mg and 100 mg.

This statistic is relevant now because in the US, the set standard for decaffeination is removing at least at least 97% of the caffeine content. According to the FDA, coffee that is branded as decaf, contains anywhere between 2 and 15 mg of caffeine. Another study found that decaf coffee contained anywhere between 0 mg and 7 mg of caffeine (results carried based on preparation method and coffee type).

Even though some brands aren’t adhering to that 97%, that is still a significant reduction, right?

How Is Decaf Coffee Made?

There are more than a few methods of decaffeinating coffee but these procedures can usually be grouped into two categories: solvent based and non-solvent based.

If you’ve been talking a look at various decaf coffee brands, then you’ve probably come across ones that claim to use the “Swiss water method”. It sounds prestigious (or pretentious), right?

The Swiss water method is one of the most popular non-solvent based methods of decaffeination and it is also arguably the safest as well. It is completely natural and there are claims that it can reduce the caffeine content of beans by 99.9%.

Remember, this is coming from someone that used to abhor decaf but now loves to drink it a few times during the week.

If you compare decaf coffee to the same brand of regular coffee, you’re bound to notice differences in the taste and flavor. However, decaf coffee isn’t bad by any means.

Also, the decaffeination process that the beans have undergone affects the flavor. Another reason why the Swiss water method is so popular, is because it has a far less drastic effect of flavor compared to solvent based methods of decaffeination.

Should I Be Drinking Decaf?

This is a question that only you, your body, and your doctor can answer. There are many people that drink decaf coffee for health related reasons. For example, people who suffer from acid reflux disease can handle decaf coffee better than regular coffee.

I personally drink decaf at times when I want to drink a cup of coffee but I also don’t want to disrupt my sleep schedule. Some nights, decaf coffee is the perfect after dinner drink for me.

What About Pregnant Women?

Everyone knows that women shouldn’t be chugging back beers or smoking cigarettes when they’re pregnant. However, there is still a lot of debate about whether or not pregnant (and breastfeeding) women should be drinking coffee.

Studies have shown that during pregnancy, caffeine intake should be reduced. One cup a day (if you are not drinking any other caffeinated beverages) should not be harmful. Still, if you’re extra cautious, you could make the switch to decaf during your pregnancy.

Do What’s Best for You!

If your digestive system or your sleeping habits are suffering as a result of coffee, then it may be worth giving decaf coffee a try.

You can either fully switch over to it or you can do what I do and just include it in your coffee rotation.