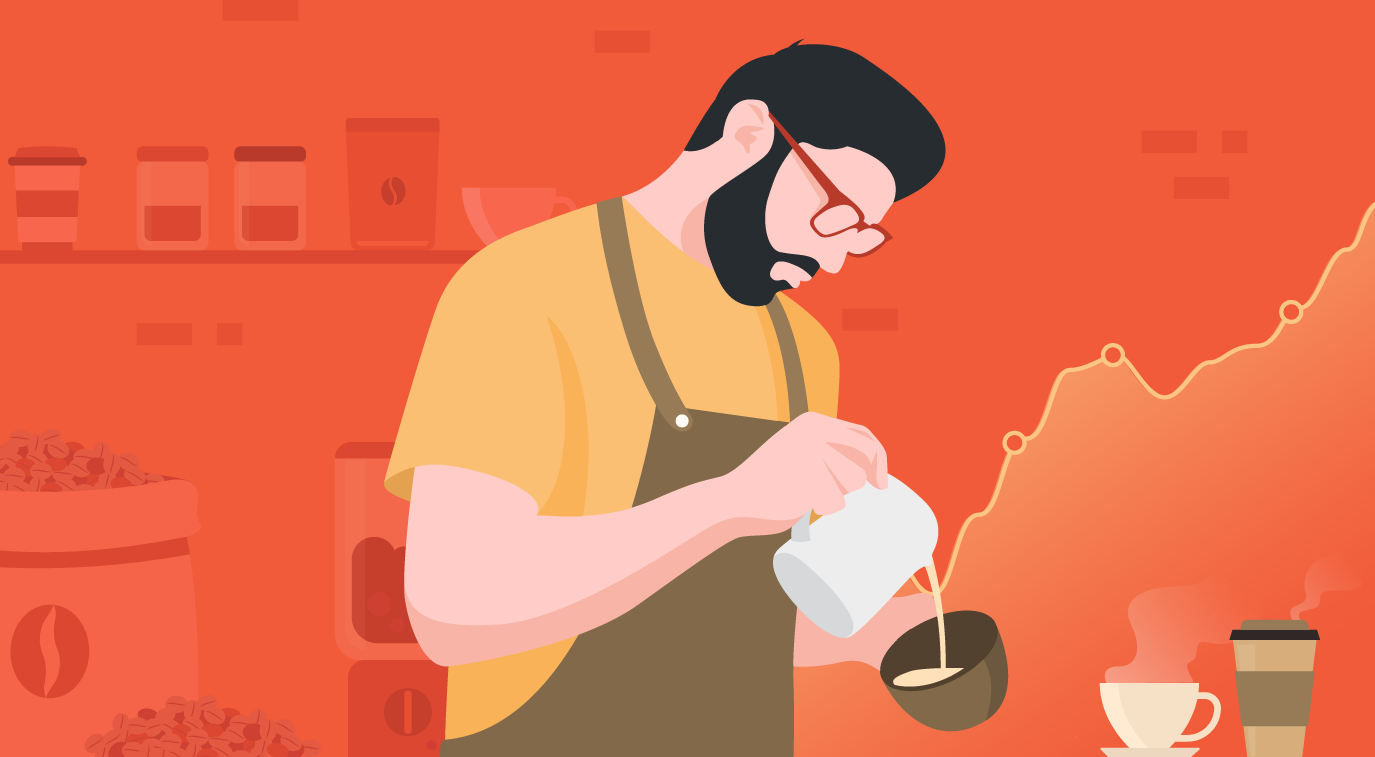 Caffeine Fiend is reader-supported. When you buy a product via links on our site, we may earn a commission at no extra cost to you. Learn more.
0
Shares
0
0
0

We’ve found that coffee bean prices in the commodity market don’t have much of an impact on coffee prices at local cafés.

The average price of a cup of coffee has been steadily increasing since 1975.

On the other hand, we’ve used commodity market data from macrotrends to detail the ups and downs of coffee bean prices for the same time period.

There is no clear cut trend in the way that the commodity prices have changed over the years. The Record Low was almost two decades ago, in December 2001. On the other hand, the all-time high was in April 1977.

Whereas at first glance the average price of a cup of coffee has been steadily increasing from 1975 to today, the price of green coffee beans in the commodity market seemed to be fluctuating sporadically.

If we take a closer look at how a smaller section of these graphs (last 9 years) can be compared to each other, we can see that this hypothesis is supported.

So why is coffee becoming more expensive?

To Which Extent Do Commodity Coffee Bean Prices Affect Coffee Prices at Cafés?

This breakdown for the actual price of a cup of coffee is in GBP; however, the same underlying principles would apply to a price that was in USD.

I the average price of a cup of coffee is taken to be £2.50, the cost of the coffee itself only accounts for £0.10 of that overall price.

In addition to that, 80% of the cost of coffee is the cost & margin of roasting.

This margin itself is also debatable; since as an export commodity, coffee is normally transported in the form of green beans, and most coffee stores or coffee chains roast coffee beans on their own.

So why are coffee prices going up at coffee shops/cafés?

Once again, if we take a look at the image above, we can see that the two biggest factors that affect the final price of a cup of coffee are rent and wages.

If we take the aforementioned £2.50 as a baseline price for a cup of coffee, then we can estimate that together, rent and wages make up £1.51 of that price. From this data we can extrapolate that approximately 60% of the money that you are paying for your cup of coffee covers locale rent and employee wages.

Would it be cheaper then to make coffee at home, then?

Would DIY be cheaper when it comes to coffee?

This might actually be the case, on the long-run.

Here’s a good example of this in from of a data visualization, posted by Reddit user u/Mary-Samsonite on r/dataisbeautiful.

You can save up to $745 per year if you usually buy on cup of takeaway coffee per day, by brewing it at home.

u/Mary-Samsonite finds that when it comes to coffee, daily take-away has the highest cost ($1456) when calculated for 365 cups (or a longer period of 1 year).

The home options had significantly lower prices when calculated for 365 cups (or days), even when the initial cost of the brewing device was taken into account.

Out of the three, the Espresso Mahcine (Breville) was the most costly home option; at $714 for 365 cups (or days). However, it was still less than half of what daily take away cost.

Overall, home brewing is bound to be cheaper than any cup of take away coffee. This is because when you buy a cup of coffee from your favorite coffee shop, you aren’t just paying for what’s in the cup, you’re also helping them cover things like rent, wages, taxes, and an assortment of miscelanea.

However, remember that you still are going to have to make an initial investment in a brewing device and possibly accessories such as a coffee thermos if you want to take your coffee with you.

You would also have to dedicate time to learning how to brew effectively and efficiently, and extra minutes every day to brew your coffee.

Jacqueline is a trained teacher with almost two decades of teaching experience under her belt. However, her friends and family would tell you that her true passions are writing, DIY projects, eating good food, and of course, listening to "Weird Al" Yankovic.