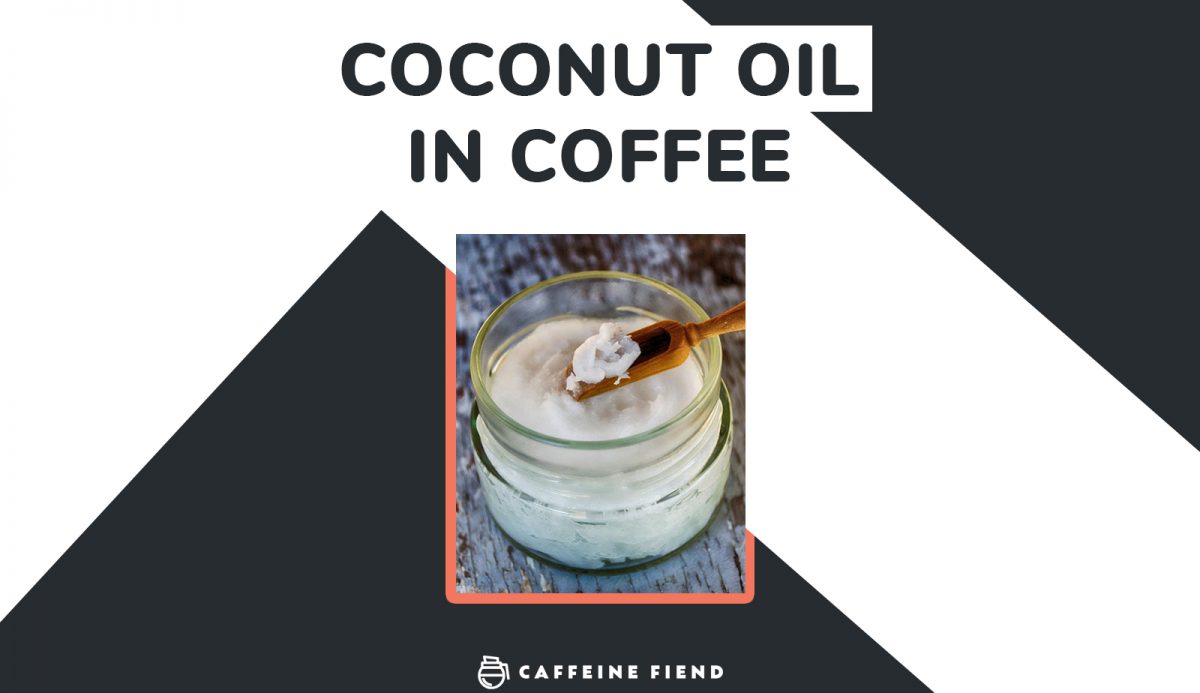 Coffee possesses a wealth of proven health benefits. While it’s taste and stimulating effects are the main reason people drink coffee, its healthy side effects can’t be denied. Including coconut oil in coffee is another novel yet surprising way that people are making their morning cup of coffee even more nutritious.

And while it might sound strange, it’s really not that crazy when you start looking into it.

It’s no myth that coffee does more for your body than just taste and smell incredible. Warm woody aromas aside, coffee has been shown to increase athletic performance and energy levels. It’s also possesses certain properties which are ideal for maintaining a strong immune system.

For athletes and health nuts in particular, drinking coffee makes a lot of sense. It’s one of the few drinks that can actually enhance performance with few if any negative side effects. But should you putting coconut oil in your coffee in order to take advantage of additional health benefits?

Why Would I Put Coconut Oil in my Coffee?

If you’ve heard of butter or Bulletproof coffee, then you’ll know that the practice of adding certain beneficial fats to coffee has been trending in wellness circles for a while now. Not only does it provide a slow releasing energy boost and an increase in mental faculties, but it helps promote weight loss too.

Because coconut oil is relatively high in calories, it’s commonly used a breakfast replacement. It not only satiates hunger and curbs appetite, but breaks down caffeine slowly for a prolonged release of energy.

It’s especially beneficial for those on a low-carb, high-fat or ketogenic diet.

The reason for its efficacy has to do with coconut oils’ chemical composition, in particular the high amounts of medium-chain-triglycerides (MCTs) and lauric acid it contains. Unlike long-chain-triglycerides which are another type of fat found in foods, MCTs are broken down rapidly by your liver and used as fuel immediately.

If not absorbed by the liver, MCTs can also be converted into ketones. Ketones are substances produced by breaking down large amounts of fats. Unlike those who rely on sugars like glucose as an energy source, people following a ketogenic diet rely on ketones for most of their energy.

Drinking coffee with added coconut oil can help those on a ketogenic diet stay in a metabolic state called ketosis. Maintaining this state has been linked with a number of health benefits including reduced risk of heart disease and weight loss.

Ketones aside, the other hero nestled within coconut oil is lauric acid. Lauric acid is an MCT that creates ketones at a moderate but sustained pace, and allows them to be metabolized more steadily than other MCTs. This makes it one of the most effective ways for those on the ketogenic diet to stay in ketosis.

Freshly prepared coffee is approached with a certain reverence, and most people would scoff at the idea of adding anything to it, let alone oil. But the truth is that adding coconut oil to your coffee isn’t the flavor slayer it might seem like at first glance.

It’s actually pretty delicious. If you’ve ever added full cream to an americano (and really, who hasn’t?) then you have an idea of how thick and creamy coffee can be. Adding coconut oil achieves a very similar similar consistency.

In the same breath, coconut oil isn’t too sweet or overpowering. Unlike other additives like creamers or sugars, the flavor is balanced and mellow. It adds a hint of sweetness that enhances rather than masks the coffee’s natural flavor profile.

Coconut Oil in Coffee: Is it Healthy or Not?

It’s hard to say definitively whether adding coconut oil in your coffee is healthy or not. Speaking in such absolute black and white terms is difficult when it comes to anything health related. Your personal health goals, lifestyle choices and even your genetics are going to determine whether or not drinking coconut oil is beneficial.

That’s not to say that coconut oil is unhealthy. As we discussed above, there are numerous benefits associated with consuming coconut oil in your coffee on a regular basis. But like anything in life, it’s possible to overdo it or consume it in an unhealthy manner.

We’ll discuss both the benefits and the drawbacks in more details below.

A number of studies have shown that the combination of coffee and MCT oils can speed up a person’s metabolism. Caffeine in particular has been shown to help convert fats from tissue into energy, in addition to increasing a person’s metabolic rate.

Coconut oil doesn’t speed up the metabolism per se, but it is effective in helping people lose weight. With over 120 calories per tablespoon of coconut oil, consuming it with your coffee can help satiate your appetite and reduce overeating. It’s for this reason that many people use it as a replacement for breakfast altogether.

A combination of both coffee and coconut oil has been found to assist with both fat burning and weight loss.

It’s no secret that coffee makes people more awake and alert. Caffeine is well-known for being the secret ingredient that helps struggling parents deal with kids and athletes achieve peak performance.

As we discussed above, coconut oil is also rich in a number of different MCTs. Unlike other foods containing LCTs or glucose, MCTs are processed and broken down by the liver into ketones. These ketones are then used a source of fuel for your body, resulting in higher energy levels.

They’re also broken down much more slowly than other types of fuel. This results in a sustained release of energy, preventing erratic spikes (and crashes) of energy which ordinary coffee is known to cause.

Another well known fact about coffee is that it gets things moving along in the morning. The MCTs in coconut oil in addition to the caffeine in coffee ensures that your bowel movements stay regular and your digestive system healthy.

It’s kind of ironic, because in the past oils such as those from coconuts were believed to clog your arteries. It turns out it does the opposite, and unclogs a lot more than simply your veins.

Just remember to consume coconut oil in moderation; too much and you might just find yourself on the toilet for the rest of the day.

But wait – cholesterol, the orchestrator of heart attacks, is bad, right? Wrong. Certain types of cholesterol are bad, but coconut oil contains none of those.

In fact, cholesterol is an essential fat that your body needs, but due to a bad PR campaign in previous years has been given a negative reputation. It provides stability to your cells, and gets transported to them by molecules called lipoproteins.

The HDL in HDL cholesterol stands for high-density lipoprotein. Coconut oil is high in this type of cholesterol and its beneficial to the body in a number of different ways.

For starters it scavenges and removes low-density lipoproteins, AKA LDL, AKA the stuff found in margarine and vegetable oils, AKA bad cholesterol. HDL also repairs and maintains the inner walls of blood vessels, reducing the risk of heart attacks and strokes.

Coconut oil is high in lauric acid; it makes up about 50% of the MCTs present in the oil. Lauric acid is most commonly found in breast milk, where it provides a bevy of protective agents to newborns and infants.

Lauric acid has been shown to be useful in treating the flu, the common cold, cold sores and fever blisters. It has also been beneficial in preventing the transfer of HIV from mothers to their children during pregnancy.

It also boosts antioxidant absorption and can assist your body in absorbing certain vitamins. On top of that it has both antiviral and antibacterial properties which helps bolster and strengthen the immune system while preventing disease.

Caffeine has long been known to improve brain function and mental faculty. It’s a stimulant that, when consumed, blocks an inhibitory neurotransmitter called adenosine. Adenosine is responsible for making you sleepy, so by blocking it your brain feels sharper and more alert.

MCTs have been shown to help combat neurodegenerative diseases too. Especially when used in conjunction with a ketogenic diet, MCTs have shown promise in managing conditions like epilepsy, autism and Alzheimer’s disease. With regards to Alzheimer’s, only two studies have been conducted, but the results have shown some encouraging results.

Downsides / Side Effects to Putting Coconut Oil in Your Coffee

Although coconut oil and MCTs are considered safe and beneficial, there are still some downsides to consider.

– MCT coffee as a meal replacement might mean lost nutrients

Many people who consume coconut oil in their coffee are also on a ketogenic diet. Because of the high fat content of coconut oil in coffee, many people use it as a breakfast replacement and energy source.

While this sounds like a great idea to promote weight loss, you might be missing out on many crucial vitamins and minerals provided by a full, healthy breakfast.

If you’re getting rid of breakfast altogether, ensure that the rest of your meals incorporate a full variety of nutrients such as proteins, carbohydrates and fiber.

This way, you can safely consume coconut oil in your coffee while still meeting your recommended daily nutrition goals.

Like anything in life, consuming coconut oil and MCTs should be done in moderation. There’s evidence to suggest that consuming high doses of MCT oil over a prolonged period of time could increase the amount of fat in a person’s liver.

Some research conducted on mice found that around half of the fats found within MCTs increased liver fat when consumed over a long time. However, the same research also found that total body fat was reduced and insulin resistance increased.

– Could be dangerous if you have certain medical conditions

Certain medical conditions such as gallbladder issues or the inflammation of the pancreas mean consuming excess amount of fats may be dangerous. Instead of consuming more fats in the form of coconut oil in your coffee, consider replacing harmful fats such as LCTs with the drink instead.

It’s much more effective when used in this way and could help prevent potentially debilitating diseases.

How Much Coconut Oil Do I Put in My Coffee?

If you’ve come this far then we can safely assume you’re keen on attempting to make your own coconut oil-infused coffee. Luckily for you this isn’t rocket science. In fact, it’s not complicated at all.

Simply brew coffee as you normally would in whatever style you prefer. We found that coffee made with the French press method or a straight-up americano works best.

Once brewed, pour your coffee into a blender and add two tablespoons of coconut oil. The hot coffee should help to melt the oil down, but once you start the blender it should combine beautifully.

You can also simply stir your coconut oil into your cup of coffee. But if you want a really creamy and frothy drink, we recommend using a blender.

It’s important to keep in mind that there’s an upper limit to the amount of coconut and MCT oil you can consume in a day. The recommended daily limit is about four tablespoons.

So if you’ve never had coconut oil before, it’s a good idea to start small and work your way up. Otherwise you might just find yourself running to the toilet while your coffee gets cold.